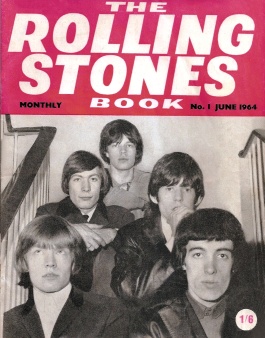 Between 1964 and 1966, the Stones issued THE ROLLING STONES BOOK (also known as “The Rolling Stones Monthly Book”), the equivalent of the Beatles’ ‘The Beatles Monthly Book’, as well produced by British publishing company Beat Publications Ltd. The first issue came out on June 10 1964, and continued to be published monthly until November 1966, with a total of 30 numbers. Each one featured approximately thirty pages (size 8 X 6.25 inches) containing updated information about the group, as well as exclusive photos, interviews, song lyrics, etc. The Beatles Monthly Book closed down temporarily in the early ’70s, but it was revived later, first reprinting the originals, but then as a launching pad for UK Record Collector magazine, and finally shutting up in January 2003, while ‘The Rolling Stones Book’ had only the original edition. Here’s a Bill Wyman interview (“Bill Speaks”) on the first issue, published on June 1, 1964

How many in the family?
My parents, William and Kathleen Wyman, brothers John and Paul, sisters Judy and Anne.

How much do you weigh?
Ten stone — but tending to put on a little bit!

Where did you go to school?
Beckenham Grammar School. Wasn’t much good at most of the subjects but I could always do well
at mathematics. At least it means now that I’m pretty good at counting money !

What musical education did you have?
I originally studied piano but I turned to guitar after getting all caught up on the Chuck Berry kick.
I realised that if I wanted to play that sort of music I’d stand a much better chance on guitar than piano. But I still like fooling about on piano.

What job did you do when you first left school?
Oh, I didn’t really know what to go for. Engineering interested me and I started in a little firm in Lewisham. I was bored, but realised I had to get moving in a small way. Later on I had a little promotion and became a sort of storekeeper. Then I tried working in a big store in Penge, near where I now live. Eventually I went back to the first place.

What happened then?
Oh — I had to leave. Because of my hair. You see, I’d let it grow and grow and people started
giving me curious looks. I’d decided the Rolling Stones were doing the sort of musical sound I liked. So I was with them in spirit. And in hairstyle. I either had to have a haircut or leave the firm. So I left.

You weren’t originally with the Stones — so how did you meet up with them?
Funny, this. I’d got involved with some rock’n’roll bands down in our part of Surrey. And then, out of the blue, I saw an advertisement which said the Stones were looking for somebody to play bass. I didn’t hesitate. It was like a dream come true. We seemed to click from the first time I sat in with the others.

Any other musical interests?
Apart from Chuck Berry you mean? Sure, the good R and B boys from the States, like Jimmy Reed, John Lee Hooker. Or the wild man of rock, Jerry Lee Lewis. From the guitar point of view I also like Les Paul, which’ll shake some people, I suppose.

What about off-stage hobbies?
I’m keen on astronomy. I don’t mean just reading my “stars” in the daily papers. I like to study what it all means, what it’s all about. But I don’t pretend to be an expert. Not yet, anyway. I also like poetry — reading it and making my own efforts to write it.

Do criticisms of the Rolling Stones worry you?
No — why should they! Some of the people who laugh at us, or just pretend we don’t exist, look
pretty weird to us. Why should I behave exactly as somebody else wants me to?

Any bad moments in your career?
Only that business of not getting enough sleep. You see, early on I played with the Stones and also had my own job in the day-time. If I got three or four hours sleep, I’d be lucky, I wandered around in a daze.

Do screaming audiences put you off at all?
No, it’s when they DON ‘T scream that we get worried. Seriously, you hear some people get annoyed and complain that nobody is listening to the music. But it’s all part of the excitement. After all, you can listen to the music on records.

What colour are your eyes?
I dunno, they seem to change — if that’s possible. I’d say a sort of mixture of green and brown.

How do you like to relax?
At home! Feet up, just listening to records. But I quite like going to see good films. I’m keen on the big adventure productions and particularly I like Burt Lancaster and Kirk Douglas.

Anything you miss from the old days?
There’s this business of not being able to get about much without being recognised. It’s fine most of the time, but there are some days when you just want to forget about being a Rolling Stone.

Supposing the Stone scene suddenly dried up. Any idea what you’d do as a job?
Well, I feel much more confident about my musical talents now. So I’d probably stay rooted in the
music business, even if it meant being a backroom boy in the sense of being a session musician.

Who are your best friends?
The other Stones, for a start. And people who’re connected with us, like Andrew Oldham. They’re the ones who made it possible for me to get out of an office.

Any strictly personal ambition?
Yes — I’d like to meet up with some of the people who took the mickey out of us in the early days.