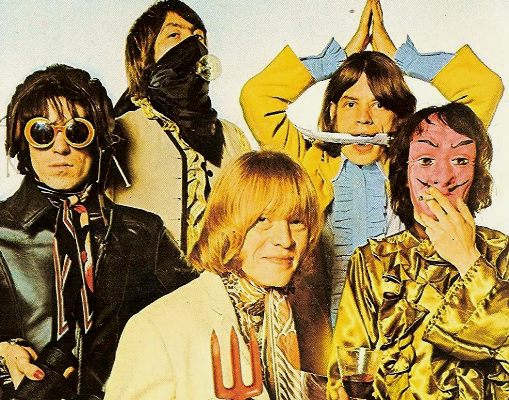 *From Martin Elliott’s book THE ROLLING STONES COMPLETE RECORDING SESSIONS 1962-2012:
As a complete contrasts to the heady recording period of 1967, the sound created on Jumpin’ Jack Flash just six months later was a monumental transformation from the music realized during the SATANIC MAJESTIES sessions. The band’s decision was to return to R’n’B in English studios and this they did with the precision of Jimmy Miller at the controls. He got on well with the Stones -so much so that he was to produce for them for the next six years. It was a relationship which would severely test him and endanger him to the control-room scrap head. The Jumpin’ Jack Flash foundations were led by Bill Wyman during the Surrey sessions as he ‘mucked around’ with a chord sequence on the piano. Brian Jones and Charlie Watts improvised on it until Keith Richards and Mick Jagger entered the studio. The duo knew instantaneously that the sound had great possibilities. Mick had some nearly completed lyrics and Keith had some guitar riffs -they were both inspired by his gardener at Redlands, Jack Dyer, and so they set about recording and bringing all these ideas together. The heavy guitar chords which run throughout the track immediately assault the senses. They are heavy but acoustically based. Keith used t o record his work on to cassette and then use that to play back to the rest of the band. On Jumpin’ Jack Flash they decided that was the ‘sound’ they wanted to recreate and so recorded the acoustic guitar on cassette with so much overload that it sounded electric. Keith reckoned he was born with the riff, either backwards or forwards. Jagger shouts ‘one, two’ and the band join in supplying the incessant riff around the uplifting vocal. Brian Jones shuffles his demonic maracas as Keith’s wonderfully distorted lead guitar provides the Stones with their most powerful rock sound to date… And what was that brass-like sound at the end? Actually a mellotron played by Bill Wyman. Ian Stewart contributed a background piano. Brian Jones was so happy with the end result that as soon as the session finished he contacted a friend of his. Ronny Money -wife of musician Zoot Money- and told her the Stones had returned to rock and roll with this thing called Jumpin’ Jack Flash, it’s a gas! It gave the Stones a British number 1 single and a worldwide hit. Originally, it was intended for release on BEGGARS BANQUET, the next album, but the overwhelming enthusiasm created by the track brought an early single release.