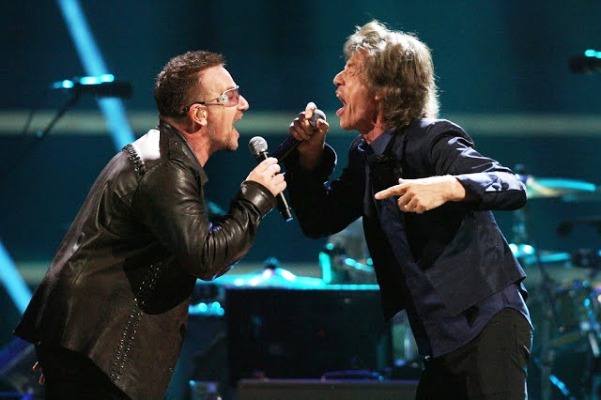 Mick on U2 (1997):
“I love Bono, and I like the band and the records. But having said all that, I don’t think they really performed as large as I thought they should. You have to transcend the production. OK, if you’re Bono, you don’t want to be like me, running up and down the fucking thing all the time. But it’s one way to get people’s attention, you know? There he is! It’s him in yellow! Listen: it’s theater; it’s large; it’s entertainment. I think it’s possible that U2 are not really a stadium act – in their hearts. They always seem to be apologizing. I never want to apologize for spending $10 million, say, on the Steel Wheels tour. It’s not an apology that you’re out there and it costs 50 bucks. The Rolling Stones never apologized. We were always out there with a good show for market price. And, really, I always try and get out there and make sure that we’re keeping their attention, working the audience, whether you’re in a club or a theater or a stadium. You can’t just stroll through it. I wish you could, sometimes – when it’s the second night in wherever, it’s 41 degrees, and it’s raining. But you really have to push it.”