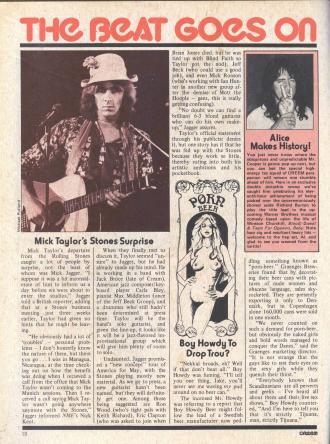 Mick Taylor’s departure from the Rolling Stones caught a lot of people by surprise, not the least of whom was Mick Jagger. “I suppose it was a bit inconsiderate of him to inform us a day before we were about to enter the studios,” Jagger told a British reporter, adding that at a Stones business meeting just three weeks earlier, Taylor had given no hints that he might be leaving. “He obviously had a lot of ‘troubles’ -personal problems- I don’t honestly know the nature of them, but there you go. I was in Managua, Nicaragua, at the time checking out on how the benefit was doing when I received a call from the office that Mick Taylor wasn’t coming to the Munich sessions. Then I received a call saying Mick Taylor wasn’t going anywhere anymore with the Stones,” Jagger informed NME’s Nick Kent.
When they finally met to discuss it, Taylor seemed “unsure” to Jagger, but he had already made up his mind. He is working in a band with Jack Bruce (late of Cream), American jazz composer/keyboard player Carla Bley, pianist Max Middleton (once of the Jeff Beck Group), and a drummer who still hadn’t been determined at press time. Taylor will be the band’s solo guitarist, and given the line-up, it looks like it will be a jazz-flavored improvisational group which will give him plenty of room to solo. Undaunted, Jagger promised a “new concept” tour of America for May, with the Stones playing mostly new material. As we go to press, a new guitarist hasn’t been named, but they will definitely get one. Among those being suggested are Ron Wood (who’s tight pals with Keith Richard), Eric Clapton (who was asked to join when Brian Jones died, but he was tied up with Blind Faith so Taylor got the nod), Jeff Beck (who could use a good job), and even Mick Ronson (who’s working with Ian Hunter in another new group after the demise of Mott the Hoople -geez, this is really getting confusing). ‘No doubt we can find a brilliant 6-3 blond guitarist who can do his own makeup,” Jagger assures. Taylor’s official statement through his publicist denies it, but one story has it that he was fed up with the Stones because they work so little, thereby eating into both his artistic ambitions and his pocketbook.

Keith, when he was asked about the Stones penchant for “writing songs about sex and drugs and rock’n ‘roll” (1983): “We don’t know much about anything else. It seems that and violence is playing a greater role in the world. We’re that great old cliché, a mirror of society. I love clichés, they’re so true and so boring, but there are horrible elements of truth in cliché. To me this album (Undercover) is a little bit of a brother to Beggars Banquet. When there’s too much crap going down, you find yourself writing about it and singing about it. We never stepped out of our way to be political or sociologically interesting. ‘Undercover Of The Night’ is basically about Central America: ‘Oops a daisy, here we go again,’ the possibilities and the confusion and the stupidity of not leaving people alone. I was reading something the Other day that said, ‘If the system’s the answer, it must have been a bloody stupid question.’ “
ALL ROLLING STONES DATA POSTS TODAY, October 19
IT WAS 9 YEARS AGO TODAY!
IT WAS 40 YEARS AGO TODAY!
IT WAS 47 YEARS AGO TODAY!
ALL ROLLING STONES DATA POSTS TODAY, October 18
Final setlist from last night's show. SoFi Stadium, Los Angeles, CA, USA, Oct. 17, 2021 #NoCharlieTour
Miss Richards quoting @stonesdata on her Instagram account. Now that's such a pleasure. Thanks Patti!
Keith on the Beatles (2016):
That Time Johnny Depp and Keith Richards Went Nuts on Me
HOY SE CUMPLEN 60 AÑOS, PERO...
There's lots of unreleased songs, rare videos and great Stones quotes through the years to check out (and more) Updated daily! Come visit the ROLLING STONES DATA website a (COPY LINKS AND PASTE THEM IN YOUR BROWSER)
ALL ROLLING STONES DATA POSTS TODAY, October 17
IT WAS 60 YEARS AGO TODAY...
Considering comments from many Stones fans here and there, it's quite weird to read that the Brown Sugar controversy overcame the news of the passing of Charlie Watts, just like that. Truth is stranger than fiction.