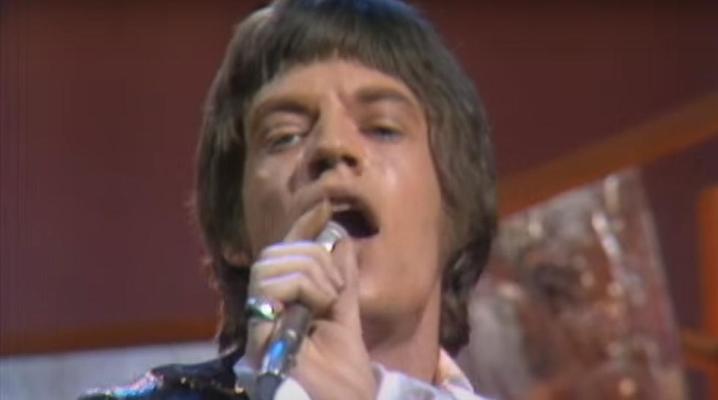 On January 15 1967, after releasing their new single ‘Let’s Spend The Night Together,’ The Rolling Stones performed a “censored” version of the song on on the Ed Sullivan show.

From Wikipedia:
On their The Ed Sullivan Show appearance of 15 January 1967, the band was initially refused permission to perform the number. Sullivan himself even told Jagger, “Either the song goes or you go”. A compromise was reached to substitute the words “let’s spend some time together” in place of “let’s spend the night together”; Jagger agreed to change the lyrics but ostentatiously rolled his eyes at the TV camera while singing them, as did Bill Wyman. As a result of this incident, Sullivan announced that the Rolling Stones would be banned from performing on his show again. However, the Stones did appear on the show again and performed three songs on 23 November 1969.

From the udiscovermusic page:
It was a busy, and controversial, start to 1967 for The Rolling Stones. On January 13, 1967, Decca released “Let’s Spend The Night Together,” backed by “Ruby Tuesday” and the following day it was released by London Records in America. The day after that, on January 15, The Rolling Stones appeared on The Ed Sullivan Show, and were forced to change the lyrics to the a-side of their single, so as not to offend the delicate sensibilities of American TV viewers.
In the weeks that followed, The Rolling Stones had the word “night” bleeped out of their record and some stations went as far as banning it altogether, which meant “Ruby Tuesday” got a lot more airplay. “Ruby Tuesday” ended up topping the charts, while “Let’s Spend The Night Together” could only make a lowly No.55.
In Britain, things were a little different, but as it proved, no less controversial. The Rolling Stones were greeted after the Ed Sullivan situation by the release of their new album, Between The Buttons. And, a few days later, on Sunday, January 22 they were at one of London’s most famous theaters to rehearse for an appearance on TV’s, Sunday Night at the London Palladium.
Having frequently been asked to appear, and never doing so, they had relented yet no one from The Rolling Stones can quite remember why they did so. According to Charlie at the time, “Personally I didn’t want to do it, and I’m not sure why we did. I suppose it was a challenge. It’s always done more harm than good to anybody I’ve ever seen on it.”
One reason for their appearance was that opportunities to appear on TV were less as Ready Steady Go!, the best of the 1960s pop programs had been taken off the air; it was also true that Sunday Night At The London Palladium had a huge audience, close to 10 million.
According to the show’s producer, “They arrived with all their music on a tape. Their manager Andrew Oldham sat alongside me checking the sound level. I was so disappointed in my dealings with them. Not only were they late for rehearsal, but I feel I was confronted with ill-mannered, studied rudeness.” But then again, according to Keith, “The show’s so bad we couldn’t rely on them to get the sound we wanted. It’s not as if we can’t play live,” is what he told Disc a week or so later.
On the TV show, The Stones mimed, while Mick sang live to “Ruby Tuesday,” “Let’s Spend The Night Together,” and “Connection,” the latter being a track from Between The Buttons. It was not the miming that was controversial, though. It was The Stones’ refusal to appear on the closing sequence of the TV show. They refused to stand on the revolving stage, when all the performers and the show’s host, Dave Allen, were expected to smile and wave to the audience. Andrew Loog Oldham had a row with Mick about it, and, in the following days, angry viewers took to writing letters to the press.
One lady from Oxford suggested that The Stones “should take a lesson from the real stars like Gracie Fields, Margot Fonteyn, Frankie Vaughan, etc., none of whom would dream of being so rude to either their fellow artists or the public.” While another disgruntled Home Counties viewer said, “It is too late to prevent this record going on the market, but for goodness sake let us ban any sequels before the entire business has a harmful effect on our nation as a whole.”
The row seemed to go on for weeks after. Those of a certain age couldn’t comprehend why The Stones had been invited to appear, younger people couldn’t care less, and some others probably wondered why The Stones had bothered at all. As Mick told the NME, “The only reason we did the show was because it was a good national plug. Anyone who thought we were changing our image to suit a family audience was mistaken.”
On the following week’s Sunday Night at the London Palladium, comedians, Peter Cook and Dudley Moore were the stars of the show. Pete and Dud had become friendly with the Stones and, to show their solidarity with the band, they went on the roundabout with life-size cardboard cutouts of all five Stones, created by Gerald Scarfe.
Oh. And how did The Rolling Stones do on the charts amidst all the Ed Sullivan controversy? “Let’s Spend The Night Together”/“Ruby Tuesday” made No.3 on the UK charts.

From the Billboard page:
On Jan. 15 1967, The Rolling Stones performed on The Ed Sullivan Show under one condition — they change the lyric of their 1967 hit “Let’s Spend The Night Together” to the more family-friendly “let’s spend some time together.” It was reported that Sullivan’s exact words were, “Either the song goes, or you go.”
In those days, TV programs were a tad more conservative. For one thing, TV Parental Guidelines wouldn’t exist until the mid ’90s, so even Elvis (aka “the King of Rock and Roll”) was shot gyrating from the waist up.
Case in point: The Doors were asked to perform in the late ’60s but told to update the lyric from their hit “Light My Fire” from “girl we couldn’t get much higher” to “girl we couldn’t’ get much better.” Lead singer Jim Morrison pulled a bait-and-switch and the band was banned from returning to the show

From the Ultimate Classic Rock page:
As tough as they wanted to appear, the Rolling Stones were no match for the power of Ed Sullivan. On Jan. 15, 1967, the Stones were all set to grace the Sullivan stage for their fourth appearance when they ran into a snag.
There to perform a pair of their recent recordings, the majestic “Ruby Tuesday” and the rollicking “Let’s Spend the Night Together,” the boys were told they were going to have to change the lyrics to the latter. In 1967, the idea of a male and female spending the night together was apparently just too much for the television viewing public to handle.
As the story goes, the Sullivan people told Mick Jagger he would have to alter the lyric before showtime.
The band were to perform to a pre-recorded backup, but with a live vocal, as was often the case on the Sullivan show. Jagger reportedly protested but alas, rebellion was not on the set list that night, and the band caved to network pressure changing the line to the quaint “Let’s spend some time together.”
The show went on, and the band, decked out in their finest 1967 attire, thrilled the fans in attendance. For his own little protest, each time he sang the line, Jagger rolled his eyes, letting the kids know it wasn’t his idea to rewrite the song. He does manage to slip in the proper line about midway through.
Later in the year, a similar incident would occur when Sullivan asked the Doors to take out the ever so offensive word ‘higher’ while performing a very live “Light My Fire.” Jim Morrison, however, did no eye rolling or lyric altering. The Doors were promptly banned from the program.
And, if you’re keeping track of Ed Sullivan vs. the rockers, we can’t forget the planned appearance of Bob Dylan in 1963, who was told he couldn’t perform his song “Talkin’ John Birch Paranoid Blues.” Dylan was asked to pick a different song. He said no, Sullivan said no, and Dylan walked out.