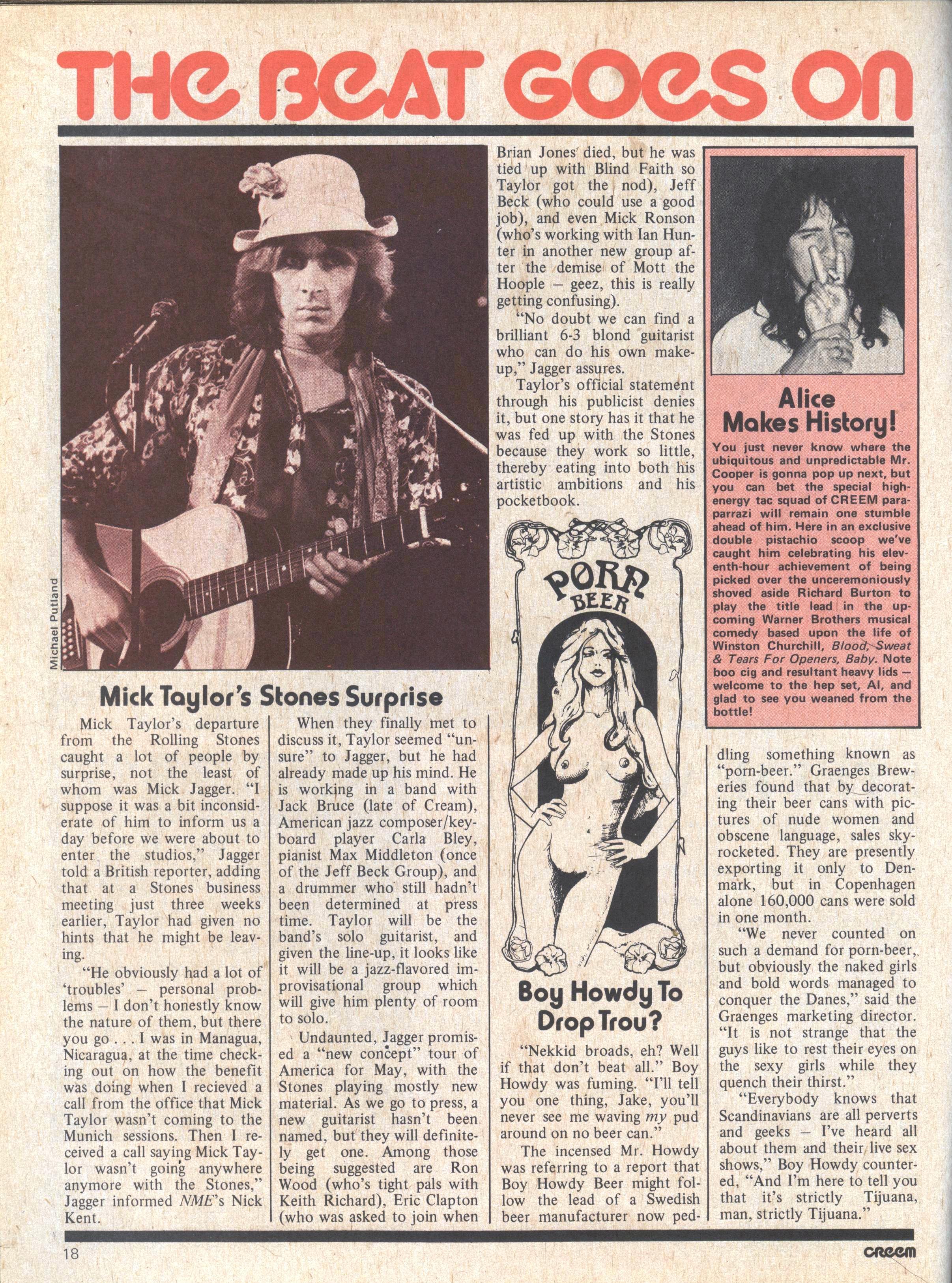 *Creem magazine, USA, March 1975
Mick Taylor’s departure from the Rolling Stones caught a lot of people by surprise, not the least of whom was Mick Jagger. “I suppose it was a bit inconsiderate of him to inform us a day before we were about to enter the studios,” Jagger told a British reporter, adding that at a Stones business meeting just three weeks earlier, Taylor had given no hints that he might be leaving. “He obviously had a lot of ‘troubles’ -personal problems- I don’t honestly know the nature of them, but there you go. I was in Managua, Nicaragua, at the time checking out on how the benefit was doing when I received a call from the office that Mick Taylor wasn’t coming to the Munich sessions. Then I received a call saying Mick Taylor wasn’t going anywhere anymore with the Stones,” Jagger informed NME’s Nick Kent.
When they finally met to discuss it, Taylor seemed “unsure” to Jagger, but he had already made up his mind. He is working in a band with Jack Bruce (late of Cream), American jazz composer/keyboard player Carla Bley, pianist Max Middleton (once of the Jeff Beck Group), and a drummer who still hadn’t been determined at press time. Taylor will be the band’s solo guitarist, and given the line-up, it looks like it will be a jazz-flavored improvisational group which will give him plenty of room to solo. Undaunted, Jagger promised a “new concept” tour of America for May, with the Stones playing mostly new material. As we go to press, a new guitarist hasn’t been named, but they will definitely get one. Among those being suggested are Ron Wood (who’s tight pals with Keith Richard), Eric Clapton (who was asked to join when Brian Jones died, but he was tied up with Blind Faith so Taylor got the nod), Jeff Beck (who could use a good job), and even Mick Ronson (who’s working with Ian Hunter in another new group after the demise of Mott the Hoople -geez, this is really getting confusing). ‘No doubt we can find a brilliant 6-3 blond guitarist who can do his own makeup,” Jagger assures. Taylor’s official statement through his publicist denies it, but one story has it that he was fed up with the Stones because they work so little, thereby eating into both his artistic ambitions and his pocketbook.